When I heard about Georgie Wolf’s “The Art of the Hook-up: Your Ethical Guide to a Successful Sex Life” and requested a review copy, I was thinking, “Yes! Maybe my confused trans ass can finally get up the nerve to try Grindr!” 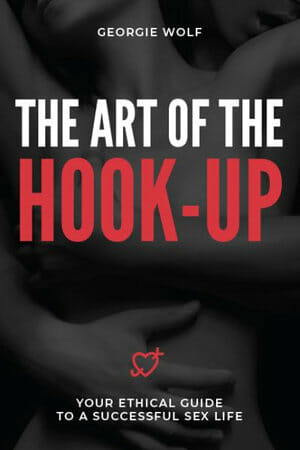 This is not that book, or not for me, anyway. This book is aimed at straight-leaning people, and those who are relatively new to sex-positive, consent-forward casual sexual encounters. I’ve been moving in those areas for a while now, and while I wouldn’t say I’m always hitting it for six (far from it!) the issues I have are, perhaps, not those that are covered in a 101-level book like this one.

That said, this book is truly excellent. If you’re a straight or mostly-straight, cis (i.e. not transgender) man or woman, and you want to start hooking up, or have better hookups, grab yourself a copy pronto. If, like me, you’re a queer who looks at mainstream dating culture and finds yourself thinking “are the straights okay?” or if you have straight friends at whom you wish you could brain-dump all the best bits of queer sexual culture, buy a few copies and start handing them out.

Wolf takes a friendly, non-threatening tour through everything needed for great hookups, starting with your own mental attitude and self-care. She breaks down a taxonomy of hookup types, from one night stands to friends with benefits and kinky play partners, and interrogates the idea of “NSA” (no strings attached) sex, because “we all have a responsibility to respect and care for the people we sleep with.” She even takes the time to go over the possibility that hookups might not be right for you. If you made it through the first couple of chapters to that point and realised that’s the case, you won’t have wasted your time reading that far.

Her coverage of negotiation and consent are solid, and include a number of games and activities taken from the curriculum of the Melbourne-based sex education workshops run by Curious Creatures. (Wolf also runs workshops with them.) Her safety and STI prevention information is pretty good too, and includes a chart of STI risk for different activities that is among the best I’ve seen. However, she doesn’t mention PrEP or U=U, information that HIV/AIDS organisations are working hard to promote these days, especially in the gay male community.

Speaking of safer sex, comments like “condoms are an essential for every hookup” and similar throughout the book are a part of what makes it clear that this book is mostly about cis M/F hookups (though a bisexual threesomes are mentioned on occasion.) A section that begins “Are you a guy into shagging guys? … Do you feel more like a lady, when your parents thought you were a bloke?” got my hopes up briefly, before pivoting to address the exact opposite group of people and define terms like “LGBTQIA+” and “transgender” so that the presumed-straight reader can “treat diverse folk right” and “have more potential partners.” (The author mentions in this section that she identifies as a bisexual, non-binary-gendered kinkster.)

A section on “ditching the rules” of PIV (penis-in-vagina) sex offers other ways to get intimate, if that’s always been your default:

When I talk about going off script, I mean letting go of the timeline and making room for experiments. Going off script means spending three hours making out, if that’s what you want to do. It means stopping halfway through fucking and giving someone a massage for a while. It means doing oral sex but not PIV sex, or hand jobs instead of oral sex. Most importantly, [it] means working out what you REALLY want, rather than just following along with what you think you SHOULD be doing.

It also reminded me of this fantastic essay on the idea of “top” and “bottom” in fanfic by greywash (Wayback Machine link in case of Tumblr fuckery), which starts out talking about authorial intent and moves on to talking about queer sex:

Related to and compounding all of that definitional trouble that can make words like “top” and “bottom” and “kink” and “vanilla” so hard to nail down in a lot of queer contexts, queer sex also tends to be super, super improvisational: it has to be, if you start out by throwing the social script for “how humans have sex” out the window. I can’t put my penis in anyone else’s vagina, no matter how much they may want me to; I don’t have a penis; if you call anything I do have a penis it will weird me out.

If your framework involves penetration = = big dicks = = masculinity, and you are a dude screwing another dude and you want to do anal, immediately that is going to make one of you less of a man. That can be something that’s fun to play with, but it doesn’t ever happen in a vacuum. Do you want to be less of a man? Does your partner? Is that a mental framework that you, or your partner, is going to resent? Is it something that lends a little extra spice to your fucking? Do you want to do it every day? Does it make you feel more connected to yourself, or less? Is it a game that you play on alternate Sundays, but need to leave behind the rest of the time? It can be any of those things, or all of those things, or something else besides; but most queer sex by definition isn’t the kind of sex where a man does man sex things and a woman does woman sex things and the man’s manliness and woman’s womanliness are reinforced by the way that they are fucking. That is—again, almost by definition—not what we do.

Which is to say, as I did the other day to my straight friend that I’m going to loan this book to, as soon as I’m done reviewing: “When you’re queer, you don’t assume PIV in the first place.” What, then, would the “ditching the rules” bit of this book like if it were more explicitly queer- and trans-inclusive? I would have liked to read that.

If my review sounds ambivalent, it’s only because I hoped I’d learn more, and I’m not the intended audience. This truly is a fantastic book — 5 stars! — for the straight folks it’s aimed at. For queer or trans folks who are just starting out with hooking up, aren’t super kinky, and don’t mind reading between the lines a bit, I’d give it 3.5 stars: at least 2/3 of the advice is absolutely solid regardless of your sexuality or gender identity.

Finally, I wanted to mention probably the best thing about this book, which really impressed me. Though the author is a professional escort and you might expect her to present as an always-perfect sex goddess, she’s invariably open and honest about the mistakes she’s made and the times things have gone wrong, from consent violations to sudden freakouts over unexpected trauma triggers. To me, this is one of the most important things about any kind of sex advice: the admission that it’s awkward for everyone, at least sometimes, and that’s not the end of the world. Recognising this helps lower the stakes and enjoy our messy, human, sexy selves.

The Art of the Hook-Up: Your Ethical Guide to a Successful Sex Life

Escort Georgie Wolf has tried it all - from awkward one-night stands, to masterfully managing her clients' sexual escapades. Her discovery that connection, communication and honesty make for a great hook-up have changed her life, and the lives of others. In this straightforward guide, Georgie explains the skills required for an ethical, successful sex life.

Wolf, Georgie. The Art of the Hook-Up: Your Ethical Guide to a Successful Sex Life. Abbotsford, Victoria: Convergence Press, 2019.