In researching queer history of the Victorian gold rush, I kept coming across examples of Chinese men accused of sodomy. In fact among the first cases I found in the National Library of Australia’s Trove archive were a few sodomy charges against Chinese men in the late 1860s and early 1870s.

Accused of an “unnatural crime”

The most detailed case in the Ballarat press was that of Ah Chew, alias Ah Munn (also occasionally spelled as Ah Chen, Ah Moon, and Ah Mun.) It all began in November 1871, with this short court report in the Ballarat Star:

Ah Chew Ah Mon was charged, with committing an unnatural crime on the person of Oliver James Hitchcock, a boy under fourteen years of age, on 14th November. The charge was subsequently amended to an attempt, and the prisoner committed for trial at the General Sessions to be held at Ballarat on 12th December.

(For more about the “unnatural crime” euphemism, see my post Beyond Buggery: digging up stories of sex between men on the Victorian gold fields.)

A few weeks later, Ah Chew appeared for trial at the General Sessions, before His Honor Judge Rogers. The General Sessions was a circuit court that visited Ballarat about once a quarter at the “new” Courthouse on Lydiard Street South, and dealt with all sodomy cases. 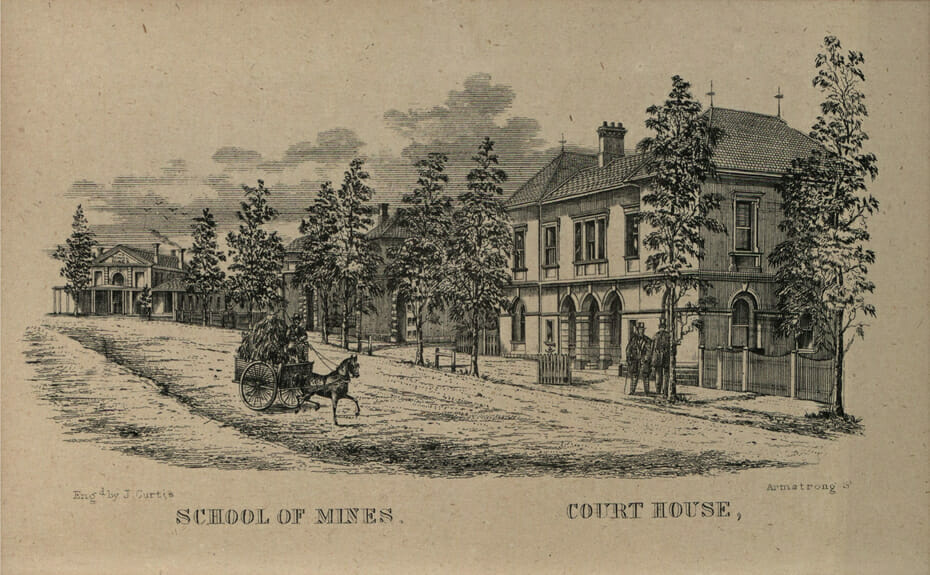 Ballarat’s courthouse in the foreground, gaol immediately behind, and School of Mines in the background. Circa 1870s. (source)

Unnatural Offence. — Ah Chew was charged with having attempted to commit an unnatural offence upon the person of a boy named Oliver James Hitchcock, on the 14th of November last, at Creswick. Mr M’Donnell, who appeared for the prisoner, made an application that the prisoner should be tried by a jury de mediaetate. Mr Chomley contended that the prisoner was not entitled to such a trial, and was sufficiently protected by his right of challenge. The case was then proceeded with. The particulars were unfit for publication. The jury found the prisoner guilty, and he was remanded for sentence.

A jury de medietate or more properly de medietate linguae, prior to 1870, was one that comprised half citizens and half members of the same nationality as one of the parties to the case. Its intent was to minimise the effect of prejudice against minorities.

Having been found guilty, Ah Chew was sentenced the next day:

This was a fairly typical sentence for attempted sodomy at the time. The specificity with which the floggings are detailed, however, is a little unusual. Even more unusual, as it turned out, were how they were delivered.

Typically, prisoners were not kept long-term in Ballarat; Ballarat Gaol was primarily used for short sentences or as a remand facility for those awaiting trial. Ah Chew, with a two year sentence, would most likely be sent to Melbourne to be imprisoned in Pentridge Prison (est. 1851), and his floggings would usually have been delivered there. On this occasion though, things were different.

The day of Ah Chew’s flogging

On the 22nd December the Star, in its “News and Notes” column, gives the following brief announcement:

The Chinaman Ah Chew alias Ah Munn will be flogged at the Ballarat Gaol at three o’clock this afternoon.

To get an understanding of just how uncommon it was for a judicial flogging to be delivered here in Ballarat, I searched Trove for the whole of the 1870s and didn’t find a single other example. More typically, prisoners were taken to Melbourne to serve their sentences, and were flogged there. Due to the novelty of a flogging in Ballarat, the press turned out in force to document Ah Chew’s punishment.

Ballarat Gaol stands at the base of Lydiard Street, one of the main streets of Ballarat. It is has an imposing red-brick wall with large iron gates, and a guard’s boardwalk and lookouts around the top. Towers stand at each corner, with outward-facing embrasures to allow guards to fire if, for some reason, the gaol is besieged – probably seen as a reasonable precaution when it was built, in the immediate wake of the Eureka Rebellion.

The open space outside the gaol is now partially car parking, partially green space. The summer before last, a pop-up bar, built in a shipping container, served cocktails on the small patch of lawn. 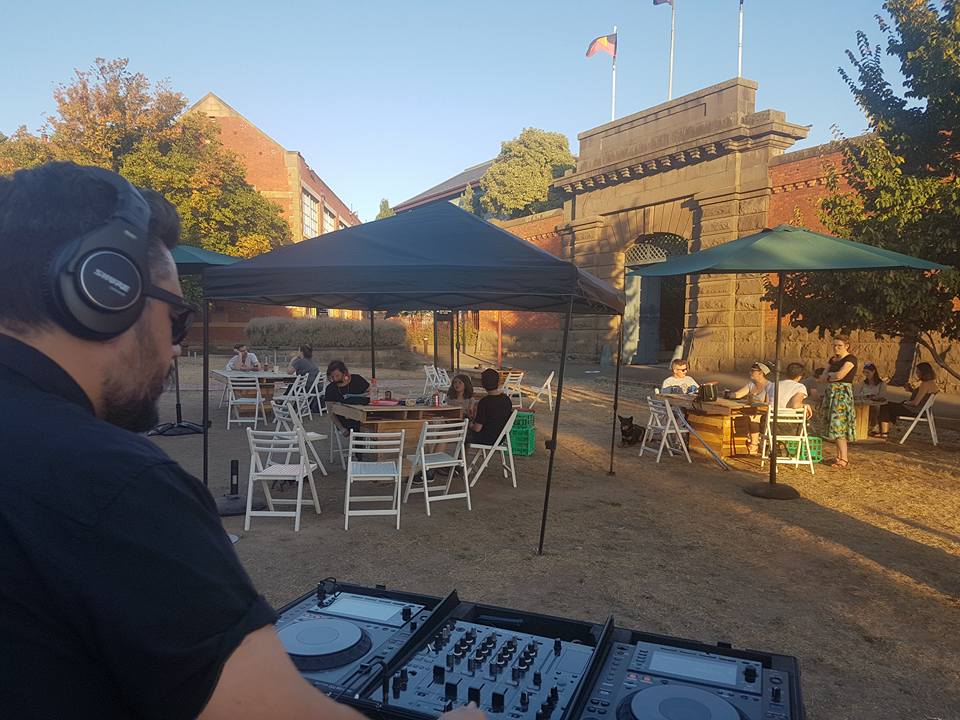 In the summer of 1871, a few days before Christmas, things were very different.

The whipping took place in the yard at the front of the gaol, whilst all the prisoners were in the exercise yard in the rear, so they did not see, and could scarcely hear, anything of the proceedings. A “triangle” had been rigged for the purpose, by two uprights of timber and a crosspiece, in the form of the letter H, being placed against the iron railings of the exercise area. At three o’clock the prisoner was taken from his cell and placed in the hands of Bamford (the common hangman), who had been brought up specially from Melbourne Gaol (where he himself was a prisoner) in charge of the senior turnkey. The Chinaman was stripped to the waist, and submitted very readily to the tricing-up operation, his legs being roped to the triangle at the bottom, and his hands being secured by straps above his head to each of the uprights. Bamford, who regarded the “cats” with an air of affection as he took them from his carpet bag, divested himself of his coat and waistcoat, tucked up his shirt sleeves, and laid on his blows with a will. The Chinaman winced at the first cut, shivered at the second, and writhed and screamed as each succeeding blow brought his back into the condition of a discolored mass of quivering flesh. The right shoulder received the most severe punishment, as the knots of the cat fell mostly on that spot. When the twenty fifth lash had been delivered the prisoner was unstrapped and taken back to his cell, moaning loudly on the way. Dr Bunce having applied a lotion or ointment to his back, Ah Chew was locked up, and left to his own reflection. The doctor states that his back will be healed in a week or ten days, after which he will be removed to Melbourne, and a month hence will receive the second instalment of his seventy five lashes.

The flogging was reported as far afield as Beechworth, in Victoria’s north-east, where the Ovens and Murray Advertiser, quoting the Ballarat Evening Mail (a newspaper which, sadly, isn’t available in the Trove digital archive) mentioned it as “the first flogging administered in the Ballarat Gaol.” I wish I had easy access to more of the Evening Mail’s lurid reporting, as I imagine it would have colourful descriptions of many of the cases I’ve been looking into:

When all was ready, the prisoner looked round, as if wondering how the punishment was to commence. Bamford, with arms bared, seemed to take a fiendish delight in his beastly work. Measuring with precision the exact distance from the Chinaman that was calculated to give full force to the “cat,” the ruffian placed himself in position and dealt the first cut – a powerful lash given with full force across the shoulders. At once a blue line rose above the flesh, and the prisoner gave a low moan and quickly turned his head to see where the next cut was to come from. The poor wretch seemed to suffer most pain from the third to the ninth stroke.

Why was Ah Chew flogged in Ballarat?

Nothing further is mentioned of Ah Chew in the Ballarat or Melbourne press, but we can probably assume that he saw out his sentence and received his second and third floggings according to plan.

What’s interesting to me in the reporting above is that little focus is put on Ah Chew’s ethnicity. Although he doesn’t speak for himself, and it’s possible that he had little or no English, the press presents him as a somewhat sympathetic character (at least in comparison to the hangman Bamford). This is despite the fact that the “Chinese Problem” was regularly debated in those same papers, and sexual immorality was frequently raised as an objection against Chinese immigration.

One question which stands out to me is: why was Ah Chew flogged in Ballarat, when local floggings were so rare? Why was it done in a public space, in plain view, and reported in gruesome detail in multiple newspapers? Why this case in particular? It wasn’t Ah Chew’s crime, which was common enough. Was it his ethnicity? Were they trying to make an example? It’s hard to tell at this remove.

Ah Chew is just the tip of the iceberg, just one of many Chinese men tried and convicted of sodomy on the gold fields. I’ll be posting more examples, as well as the ways in which racism and homophobia intersected in the colonial press, in future.