Back in January, everyone watched as the residents and tourists at Mallacoota, on Victoria’s far east coast, were forced down to the beach under blood-red skies to escape bushfires that had surrounded the town. Over the next few days, many were evacuated by naval vessels. Those who stayed were cut off for weeks. The roads inland were unpassable except by occasional convoys of Army vehicles, the only power was from generators, and fuel was rationed. Despite this, a number of Mallacoota residents managed to keep posting updates to socil media.

I’ve been working on increasing our household resilience for some time, but since the January bushfires I’ve particularly been thinking more about internet access during a prolonged power outage.

Ballarat is fortunate enough to be one of the first places in Australia to get NBN (our National Broadband Network), back before it was an utter joke, and most of Ballarat also has even faster cable internet available (which is what we have.)

My understanding (and please correct me if I’m wrong) is that FTTP NBN or cable internet will stay connected during power outages, as long as your devices at home (including your router) have power. Most fibre internet is delivered underground, and with no chance of the cables coming down it isn’t very susceptible to fires or windstorms.

But what about power at home? My house, which I rent, is grid-powered and as a renter I can’t really access the kind of power that stays on through a power outage, such as off-grid solar, grid-connected solar with battery, or a generator. My emergency kit contains options for light and cooking without electricity, and even a little hand cranked radio, but what would I do for Internet access?

The first thing I did was make sure I could keep my mobile devices charged. I acquired a portable 25W solar USB charger, which has two USB ports and enough capacity to charge phones for daily use. That’s a good start, and will be fine if my mobile data is available. But what about my usual home internet connection, the 200MB cable that (in theory) should stay connected through most disasters?

To be able to connect through my home internet connection, I need the cable modem/router to be powered. In addition to this, I have a small home server (a FreedomBox) which I recently purchased and want to use for further increasing our technical resilience (see below).

Kris de Decker at Low Tech Magazine runs a version of his website entirely on a small solar setup. An article at the Homebrew Server Club describes the hardware and software setup with particular attention to his web server configuration, including the image dithering plugin he uses to reduce download bandwidth, and the scripts he uses to present his battery level via CSS right on the screen. The server he uses is based on the same hardware as my FreedomBox, though I’ve got the pre-built kit with FreedomBox preinstalled, whereas he started from scratch. 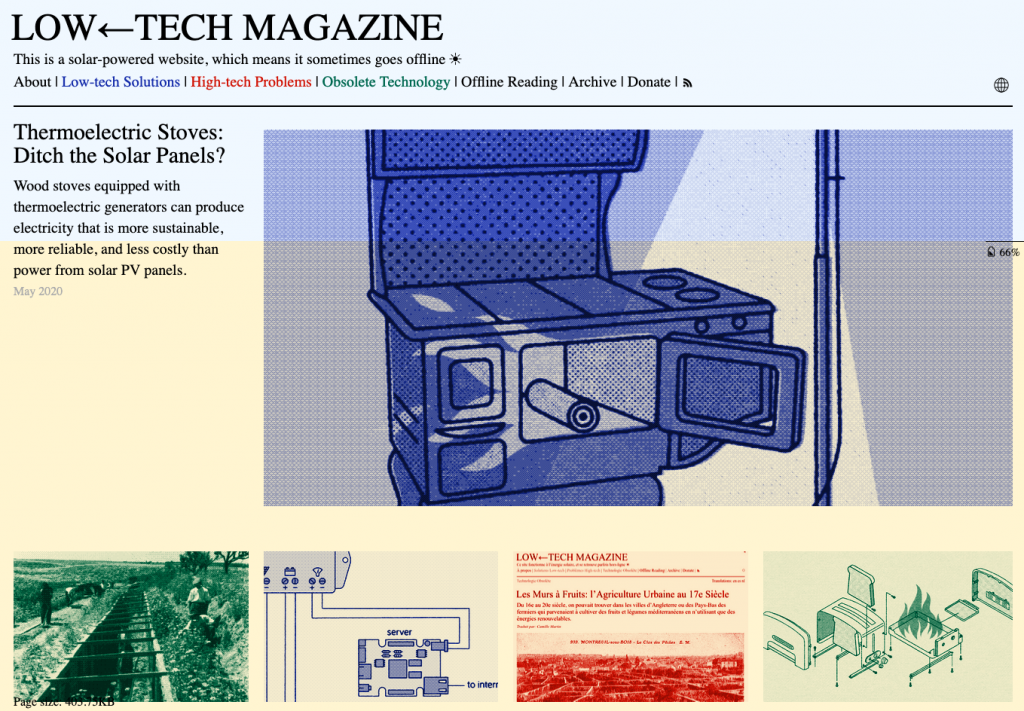 Cale Mooth at Midnight Cheese describes his own solar powered cable modem and router setup with more specificity about the hardware. I’m not a hardware person at all, but his blog post gave me enough information to understand how to put something workable together.

The vital parts are:

Even though I’m renting, I could mount the solar panel just above my bedroom window, and run the cables through a small hole in the window frame, easily repaired if/when I move out.

Cale uses an inverter to convert the battery’s 12V DC to AC so he can use his devices’ existing power plugs. However, it should also be possible to convert the 12V to the 5V my devices need without going to AC and back again.

My back-of-envelope calculations are that the battery should be able to run my devices for 2-3 days on a full charge. In especially bad weather (skies black from smoke, for instance) I could switch it off overnight if needed to extend the life.

The overall cost of this looks like being around $500 (purchasing the components new), and I plan to set it up over the next few months.

Providing connectivity for guests and neighbours

My cable modem/router offers a guest network, which is usually switched off, but in a crisis I could open up for neighbours to use. Anyone in range would be able to see the open access point, named with a URL that would point them to a webpage on my FreedomBox explaining what I’m offering.

Longer term, I’d love to see if I can find other local residents interested in community mesh networking, and maybe set up other homes or businesses around the neighbourhood with similar solar kits. This could extend the range of our off-grid Internet access beyond just my own wifi range.

Communicating when the Internet is patchy

One more thing I want to enable is good ways for people to communicate without using centralised, corporate services such as Facebook. Depending on the sort of crisis, upstream services might be unavailable, or people might not trust them. Fake news and conspiracies tend to flood those services during emergencies, and being glued to them can be terrible for mental health. A way of organising and communicating within the local community, even if we lose access to or don’t want to use the wider Internet, seems prudent under the circumstances.

I’m looking into various peer-to-peer tools for this. Scuttlebutt seems like one of the most promising. It was  been designed by a guy who sailing solo, long distance, so it’s compatible by design with on-again/off-again internet. Users can’t connect directly to each other using an app on their devices, without going through a server. However, an optional server (called a “pub” in Scuttlebutt-speak) can be set up to make it easier to read other people’s updates without being physically near them. I could set one of these up on my FreedomBox, but the system wouldn’t rely on it.

(I looked into other federated social networking like Mastodon and Hubzilla, but these require a server for people to login to, which puts more dependence on me than I’m comfortable with.

I’m also looking at Ushahidi for mapping and sharing information in crisis situations. This is a heavier weight app and is usually used for higher-profile uses than neighbourhood mutual aid, but I do wonder if it’s possible to use it that purpose. I could imagine its use in tracking who needs or can offer help, where resources are available, and so forth.

My plans, in short, are:

I’m working on this from week to week and hoping to have it all in place in the next few months. I’d welcome any feedback on what I’ve outlined, as well as suggestions regarding any similar projects that might serve as inspiration.