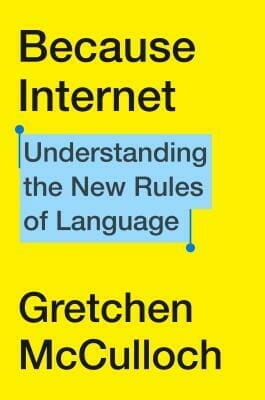 I don’t know what I expected from “Because Internet,” but the thing that delighted and surprised me most was the language used in the book itself. It’s written in Internet language, in a way that feels comforting and familiar to me, like a knowledgeable Tumblr post that makes you mash the repost button two nanoseconds after reading it.

The book is deeper and more thoughtful than you might think if you’ve read McCulloch’s well known work at The Toast on the linguistics of doge (very word, much grammar, wow.) Rather than pulling apart the minutiae of particular Internet phrases and styles – for instance she never even talks about the “Because X” formulation in the title – she steps back and takes a 10,000-foot view to show us a big picture that’s been missing from a lot of Internet language discussion up to now. Her analysis is clearly grounded in serious scholarship, her insights will make you see both your online and offline life in new ways, and her writing is accessible and entertaining.

One of the most valuable things the book does is to split Internet People into generations based not on their age but on when they first got online.

I’m one of the Old Internet People, while many of my friends are Full Internet People. This contrasts with many in my age group who are Semi Internet People, who didn’t socialise online until Facebook and the like. This is an incredibly useful way of categorising us, and goes a long way to explaining why I often feel more “millennial” than my Gen-X birthdate would suggest.

But the most important concept, I think, is the realisation that until recently the quadrant of “written, informal” language was so ephemeral that people didn’t think of it much at all. Where was it used? Postcards, post-it notes? Nowhere that was taken very seriously.

Written and spoken, formal and informal language – from “Because Internet”

That invisibility is why Semi-Internet People and Post-Internet People, and their legacy media outlets, feel that it’s hard or impossible to have real friendships online. After all, building intimacy requires informality, emotional expression, and non-verbal nuance, rather than the highly edited and carefully controlled language of formal written English.

The Internet has made informal written language more common, more visible, and more like informal spoken language, with all its variability, cultural connotations, and ephemerality. Linguists love working with informal language, and you can see the author’s love for Internet language shining through in this book, not only in the content but also in the form of her writing.

My pre-ordered copy of this book didn’t arrive for almost two weeks (grr, Booktopia!) and I’m told that it sold beyond all expectations. The author’s been careful to write in a way that will make this more than just a description of fleeting trends, and I expect I won’t be the only one who’ll be glad to have this book on my bookshelf decades from now.

Because Internet: Understanding the New Rules of Language

A linguistically informed look at how our digital world is transforming the English language.