I was following a trail from an alleged diamond thief caught promenading in drag around Melbourne’s Exhibition Building, to a well-known gang of queer larrikins in Sydney, when somehow I wound up in Wagga Wagga. This story seemed too good not to share, so here’s an article from the Toowoomba Chronicle and Queensland Advertiser, circa 1871.

PERSONATING A WOMAN IN WAGGA WAGGA

The editor of ‘Table Talk,’ in the ‘Wagga Wagga Advertiser,’ gives the following amusing story of an adventure which recently occurred in that town, where fun and humour are said to be as common as, according to Judge Francis, bad cheques are at Gundagai. The writer says— A friend of mine whom, if I say that he is the ‘gay Lothario’ of Wagga, admittedly ‘the glass of fashion and the mould of form’ of our little society, I hope it will be considered that I have sufficiently identified, was agreeably surprised the other day by receiving a delicate little note, rose-coloured and violet-scented, in a lady’s hand, signed with the adorable name of ‘Nina.’ The lady—and she evidently was a lady, for her writing was as angular and her grammar as boldly original as if she had received the very best education the first boarding-schools could give—claimed a prior acquaintance with my friend, and, with much tender recalling of the happy past, begged him to visit her at her hotel. Here was an adventure. My friend had no recollection of the adorable Nina, but no doubt she was adorable, so donning his garb of conquest, like Jack-the-giant-killer his invisible cap, he sallied forth to meet the fair foe to his peace. Arrived at the hotel, he sent up his card, and was duly ushered into the presence of the lovely being, who was only restrained by maiden modesty and a large crinoline from embracing her old friend on the spot. But no; there must be some mistake. The love-rolling eyes assume a startled expression, the chignon perceptibly shivers, and my friend himself, the hero of a hundred such encounters, recoils. The ‘old friend,’ it seems, was the wrong man, and the lovely being – well, she wasn’t lovely, but considerably, as my friend (not a bad judge) observed afterwards, more t’other. The embarrassment was mutual, but the gentleman was equal to the occasion. Gracefully extending his hand to the lady, while with the other he ‘smoothed his wrinkled front,’ he besought her to calm her feelings, assuring her that if not the right man, he would be found on a fair trial to answer just as well. Of the ‘tete-a-tete’ that ensued I have received no very distinct particulars, further than that it was a sort of happy mixture of the ‘Morning Call,’ and (mentally on the gentleman’s part) the dialogue in Little Red Riding Hood—that is to say, compliments and pretty speeches were considerably mixed with wonderment as to what large hands she had got—and what sort of a foot, judging from her other somewhat masculine proportions. At last a terrible suspicion dawned upon my friend—this adorable Nina, who seemed to be not at all adorable—this strange lady, who walked like a trooper and talked like a bank clerk, was she indeed

A lovely apparition sent
To be a moment’s ornament

or was she—horrible thought—a make-up—a woman-personator—and had he, a moral man, a lady’s man, been compromised in a ‘tete-a-tete’ of half an hour with a—man in ‘drag!’ His first impulse was to ‘sit’ upon her, and hold a sort of coroner’s inquest on her suspicious charms; but with a laudable effort he restrained his naturally somewhat inflamed feelings, and, seizing his hat, rushed into the darkness, cursing petticoats in general, and borrowed ones in particular.

I’m left wondering… who was Nina, and who was she expecting to meet, in a hotel in Wagga Wagga, population about 1,000-2,000 people at that time?

Also note the early use of the term “drag,” which the Oxford English Dictionary only dates back to 1870!

Read the original in Trove. 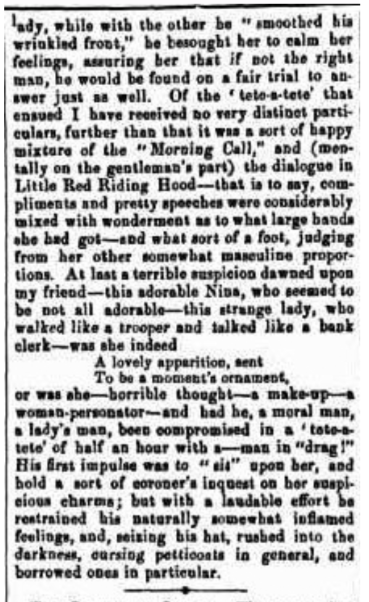